As I wrote in the post about Logicomix, I wanted to see what result can be achieved using a medium like comics to present and explain scientific concepts.

So I tried it with another book: “Mysteries of the Quantum Universe” by the theoretical physicist Thibault Damour and the author of graphic novels Mathieu Burniat.

After a quick first reading I had a positive impression, although I thought it was aimed at readers with no – or very basic – knowledge of quantum physics. You have a good time, it’s nice  graphically, but you don’t learn anything new if you’ve already read a little about this subject.

Note: I have just begun to read “Understanding Comics” by Scott McCloud (1993), a reference for understanding the codes of this medium. I hope to do a more thorough analysis in the next comics I read.

Then I read it again to provide a more detailed comments. Here they are, divided into pros and cons from my point of view: 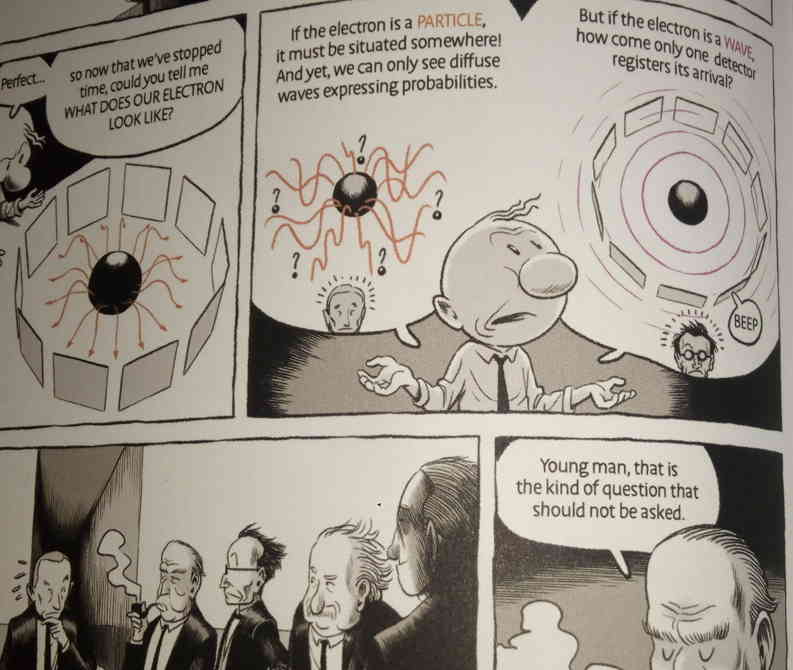 I liked it less:

Other issues can be more ‘neutral’ and I see them more or less positive depending on the point of view I take. Here are two examples:

When I finished my comments on the book I found the Brian Clegg’s review on the Internet. Although I enjoyed the comic a bit more than he did I subscribe lot of what he says (well, perhaps his problem with ink smell is a bit excessive ? ).

In short, for me it’s not a perfect book but it has some very positive aspects (possibly we all have our part of reason to praise or criticize it) and above all, as Clegg also concludes, I applaud this initiative and hope that more comics will continue to appear that explore this medium to spread the knowledge of science.

Finally, I insert the video where the authors present the book. It’s in French, and though it’s not attractive (from a marketing  point of view), it can give a better idea of the work.

New #book by Nick Lane, a great scientist&popsci writer. Rethinking the chemistry of life and its fundamental role

I don't know if this #cartoon from 100 years ago predicts the #Artificial_Intelligence of 2023, but that it was going to give us more free time to enjoy, I think it missed the mark a little bit.
In any case, I love it !
https://arstechnica.com/information-technology/2023/01/a-cartoonist-predicted-2023s-ai-drawing-machines-in-1923/

Which Countries are the Most Polarized? https://www.visualcapitalist.com/polarization-across-28-countries/

What's the limit of AI coding systems, if there any?

Why FTX feels like a scam from the 1920s

And some striking similarities between Sam Bankman-Fried and The Match King, Ivar Kreuger, who pulled off one of the biggest corporate frauds in history