I wanted to see what can be achieved by using a comic format to tell us something about science.

I chose a couple of examples that I found interesting. The first work is Logicomix, a colour graphic novel with a detailed and pleasant visual style.

Note: I don’t enter into the discussion of whether  mathematics should be considered a science and I leave to the experts the differences between comic and graphic novel

In short, the story is about the life of the mathematician-philosopher-essayist Bertrand Russell. Of his many intellectual concerns, it focuses on his important contributions to the logic and his quest of a solid foundations for mathematics.

The common narrative thread is a lecture given by Russell at a University in the United States in 1939 with the background debate on this country’s participation in World War II. Here it shows us his facet as a peace activist and thinker who analyzes conflicting ethical issues.

Throughout his personal history, outstanding mathematicians and philosophers closely related to his professional career appear: Frege, Whitehead, Cantor, Hilbert, Wittgenstein, Gödel…and the main ideas about the construction of mathematics based on a sound logical foundation are outlined. 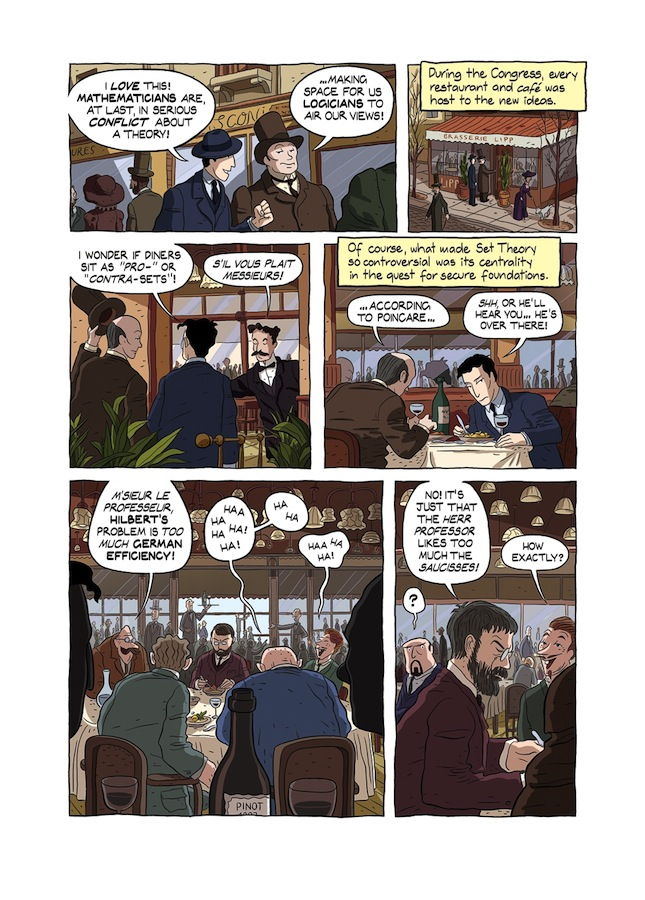 This work originally published in Greek in 2008 has had numerous translations and is written by Apostolos Doxiadis, author of several novels with plot based on maths that have been very popular, and Christos Papadimitriou, being the illustrations and color of Alecos Papadatos and Annie Di Donna respectively.

Logicomix has been quite successful (it was a New York Times bestseller) and I understand it because I find its approach very original and easy to read.

It doesn’t try to delve into the logical-mathematical part, but it does outline the problems they were facing, what they wanted to achieve and the diverse points of view that existed. As a complement there is a final annex – “Notebook”- with more detailed explanations.

It also addresses the human facet, dealing with controversial aspects of the psychology of the characters that appear in the story. We will be able to see throughout the comic as several of them end up affected by some serious mental disorder, although not everyone agrees with that, as can be read in this detailed analysis of Logicomix.

If you are familiar with these questions (logic, set theory, the problem of infinity, incompleteness of mathematics, positivism…), I doubt that you will find any new substantial idea, but perhaps the comic will discover you some detail that you didn’t know or help you to order mentally the set and sequence of facts.

Note: the authors has taken some creative licenses to give more coherence to the narration, such as some personal meetings that did not really take place, but that do not distort the ideas that are presented or what essentially happened.

In short, it is not a graphic novel to delve fully into the fundamentals of logic or the thinking of some figures or groups -such as the Vienna Circle- that appear in the story, but I’ve really enjoyed it and you learn things almost without realizing it (understand what Wittgenstein meant exactly is another history! ? ).

Note: I would like a similar book about Wittgenstein. His biography and personality make for a good story.

I understand that this was the objective of the authors using this comic format: not to create a super dense work (although you can tell there’s a lot of work behind it), but something that would encourage to know these figures and their intellectual contributions. From my point of view they have achieved it with flying colours.

Finally, speaking of the comic, it uses the narrative resource of breaking the 4th wall so we can see the authors discussing the approach of the work. I have read comments from readers on the Internet who didn’t like this effect, but I think it fits and works well in this comic. 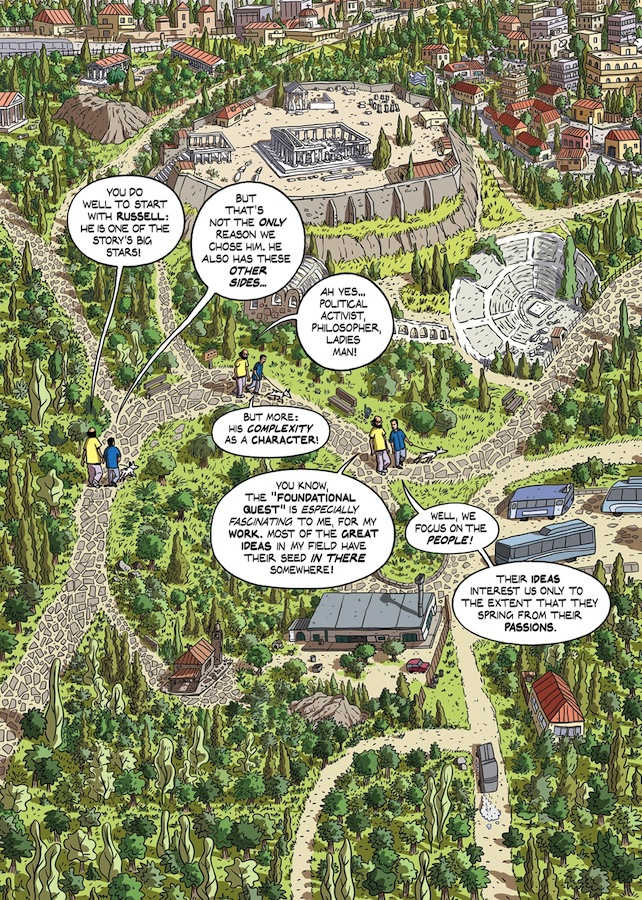 I confess that I have not read the Principia Mathematica , the book’s leitmotif, but you can consult this entry from the Standford Encyclopedia of Philosophy and perhaps understand why there are few who have really studied them.

In his ‘lighter’ side as an essayist – very prolific – I think many of us have read some of Russell. In my case I remember “The conquest of happiness”, “Why I am not a Christian” and “In praise of idleness”. I liked the way he wrote, not in vain he was awarded the Nobel Prize, with a very clear and rational exposition and a fine sense of humour.

To conclude, I can’t resist including a cartoon that I saw many years ago about Russell’s time in prison due to his social and political activism. I think it fits his character and still makes me laugh. 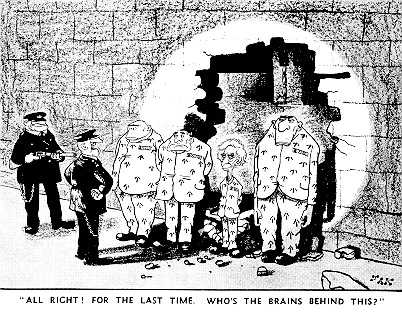 Images:
– Logicomix pages of the website of Alecos Papadatos, illustrator of the work (obtained in Archives of Internet-Wayback Machine).
– Cartoon published in the newspaper Evening Standard (1961).

New #book by Nick Lane, a great scientist&popsci writer. Rethinking the chemistry of life and its fundamental role

I don't know if this #cartoon from 100 years ago predicts the #Artificial_Intelligence of 2023, but that it was going to give us more free time to enjoy, I think it missed the mark a little bit.
In any case, I love it !
https://arstechnica.com/information-technology/2023/01/a-cartoonist-predicted-2023s-ai-drawing-machines-in-1923/

Which Countries are the Most Polarized? https://www.visualcapitalist.com/polarization-across-28-countries/

What's the limit of AI coding systems, if there any?

Why FTX feels like a scam from the 1920s

And some striking similarities between Sam Bankman-Fried and The Match King, Ivar Kreuger, who pulled off one of the biggest corporate frauds in history